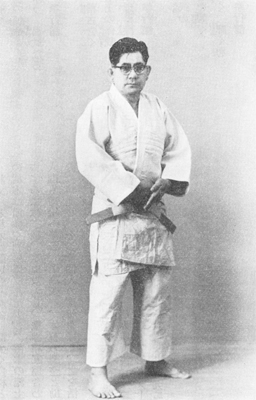 Shinan Kori Hisataka was born on 22 April 1907 in Shuri, Okinawa. Although now a part of the Naha Metropolitan area, Shuri was the original capital of Okinawa, location of the Shuri Castle and home to most of the Okinawan aristocracy.

His name at birth was Seiki Kudaka (pronounced Masayoshi Hisataka in Japanese), and he was a third generation descendant of Seison Toguchi, a member of the Okinawan nobility who was made lord of Kudaka Island in recognition for his services to the then Kingdom of Okinawa. As was the tradition, Toguchi then adopted the name Kudaka as his own. The first name Kori was taken by Shinan Hisataka later in life – a custom among some senior martial arts practitioners.

Shinan Hisataka was introduced to karatedo and other forms of Okinawan bujutsu (martial arts) from an early age. His first instructors were his father, grandfather and uncle who introduced him to the family art known as Kudaka-ryu.

Also from a young age, Shinan Hisataka was guided by Master Anko Azato (1827-c.1920), a leading government official, and an expert in Okinawan karate as well as Japanese swordsmanship and horsemanship. Azato is said to have passed on a special form of the kata Nijushiho to Shinan Hisataka. This form is said to have been modified by Azato based on his barehanded defeat of the swordsman Yorin Kanna.

As a teenager, Shinan Hisataka spent some time in the southern Japanese island of Kyushu, and learnt the art of jujutsu whilst there.

Another early teacher of Shinan Kori Hisataka was the reclusive weapons master, and former Okinawan police commissioner, Sanda “Ufuchiku” Kanagusuku (1841-1921). As Shinan Kori Hisataka’s father had died whilst he was young, Ufuchiku Kanagusuku was petitioned by the Hisataka family to teach weapons, particular sai, bo and jo to the young prodigy.

Perhaps the main teacher of Shinan Hisataka was Master Chotoku Kyan (1870-1945), himself a student of Azato, as well as Sokon Matsumura, Kokan Oyadomari and Kosaku Matsumora. Kyan refered to his style of karate as Sukunaihayashi (pronounced Shorinjiryu in Japanese), and was known for introducing such innovations as the vertical fist, the extended use of the hips in punching and kicking, and angular movement for evasion and defence.

In the late 1920’s Shinan Kori Hisataka completed his compulsory military service, and then left to return to Okinawa. In 1929-30, he travelled to Taiwan along with his teacher, Master Chotoku Kyan and Master Ryosei Kuwae. There the three Okinawans toured, demonstrated and learned from local practitioners. In one famous incident, the three gave a demonstration and the Taipei Botokuden (hall of martial virtues), where Kyan fought a challenge against a senior judoka.

At the same event, Shinan Hisataka fought a challenge match against a female Naginata master. The naginata (halberd) is an ancient samurai weapon, but in recent times has become the preferred weapon of women martial artists. This particular Naginata expert was so skilled that she had previous defeated the famous Kendo master, Junzo Sasamori (literally the co-author of the best book on Kendo). Shinan Hisataka fought the challenge, and won, utilising a bo.

Following their tour together, Master Kyan returned to Okinawa, and it was following his return from this trip that he introduced the kata Ananku. Master Kuwae, the last student of the great “Bushi” Sokon Matsumura is believed to have stayed in Taiwan.

Shinan Hisataka travelled on to mainland China, and as far afield as Burma, Thailand, Afghanistan, Russia and Mongolia, in each location furthering his studies and skills as a martial artist. Shorinjiryu Karatedo contains a rather eclectic combination of techniques, and one can only imagine where some ideas originated from during Kaiso Hisataka’s travels. Of obvious influence were some of the northern Chinese styles, particularly Baji Quan (Hakkyoku Ken in Japanese) and Shaolin Long Fist.

In 1932, Shinan Kori Hisataka demonstrated at a martial arts festival celebrating the confederation of the Manchurian state. At the time, he demonstrated the Kudaka family version of the kata Kusanku. This kata is also sometimes known as Happo-ate, meaning eight directional striking.

In the late 1930’s, following the outbreak of war between Japan and China, Shinan Hisataka was stationed in Manchuria (then occupied by the Japanese) as a Station Master in the Railway system. Over the following years, he was located in several cities, including Bakudashi, Sarachi and others. In one location, the deputy governor at the time was the great martial artist, Master Minoru Mochizuki (1907-2004).

Mochizuki Sensei was a highly ranked practitioner of Judo and Aikido, having studied under the founders of each system – Jigoro Kano (Judo) and Morihei Ueshiba (Aikido). As a matter of interest, Mochizuki Sensei’s first Judo teacher was Sanpo Toku. Mochizuki Sensei and Shinan Hisataka trained regularly at a local Budokan, and to this day the karate taught in Yoseikan Budo (Mochizuki’s composite system comprised of techniques from Judo, Aikido, Karate and other arts) is based on a form taught by Shinan Hisataka – Happoken.

It is also quite likely that many of the Aiki-like techniques in Shorinjiryu Karatedo were at least influenced by Master Mochizuki.

Follownig the war, Shinan Hisataka and his family were repatriated to Japan, via Beijing. On returning to Japan, Shinan Hisataka found the country to be demoralised, and the young people were suffering from low employment rates. He established Shorinjiryu Kenkokan Karate as a means to promote health and discipline, with his dojo initially located in Hamada village, on the southern island of Kyushu.

Within the next few years, he relocated his family and dojo to Tokyo, principally for the reasons of better educating his children. The dojo was first established in Setagaya Ward, before moving in 1955 to its current location in the Kikuicho district of Shinjuku Ward.

The opening ceremony of the new dojo was a special affair, with special guests such as Master Shinken Gima, an Okinawan master who had made the first public demonstration of karate in Japan, together with Gichin Funakoshi. Master Gima was also among the first group of people to be awarded a black belt in karate, by Funakoshi.

Its not known how often Shinan Hisataka returned to Okinawa, but since his primary teacher (Master Chotoku Kyan) had died in 1945 while Shinan Hisataka was still in China, his future source of inspiration was to be his own studies and knowledge from his main influences – the Okinawa-te and Karate of Anko Azato and Chotoku Kyan, Judo, Jujutsu and Aikijutsu, and the martial arts of China.

In the 1960’s, Shinan Hisataka sent many of his outstanding students to North America to introduce Shorinjiryu Kenkokan Karate. Most of them settled in New York, Baltimore or Montreal. These people included his son, Shihan Masayuki Kukan Hisataka, Shihan Shunji Watanabe, Shihan Minoru Morita and Shihan Shigeru Ishino, amongst others. Many of them are still resident in North America to this day.

In 1974, Shinan Hisataka retired from day-to-day teaching, recalling his son, Hanshi Masayuki Hisataka to Japan to take over as head instructor. Shinan Hisataka still regularly joined in on classes, but stood back from the administrative functions.